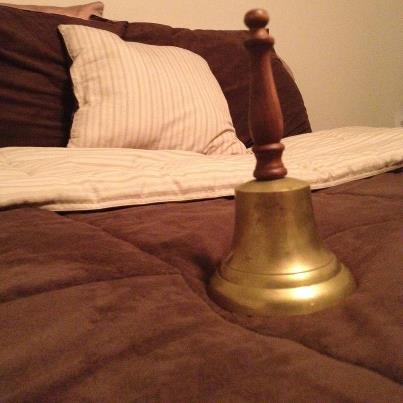 www.kellyskornerblog.com
Please leave me a comment! Posted By Kathy Olson at 6:47 AM 8 comments:

When September rolls around, I love to begin baking anything pumpkin-y. This recipe comes from the November 2005 issue of Southern Living. (Notice those lovely fall colored nails holding the magazine - aren't they groovy?) 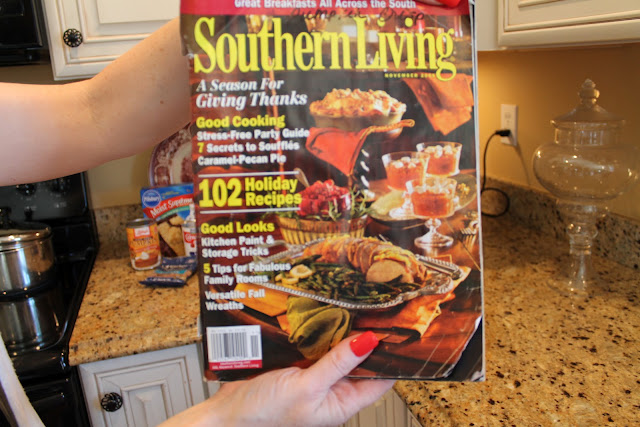 The dessert is called Pumpkin Crisp and I've been making it during this season for the past 7 years. It's easy to put together and so good with either whipped cream or ice cream.

Here are a few of the main ingredients. 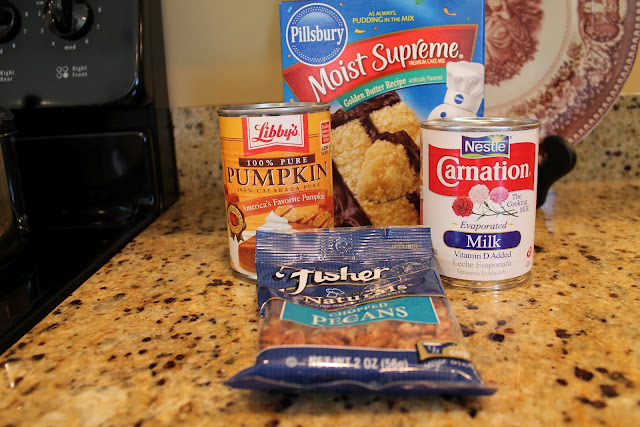 Bake at 350 degrees for 1 hour to 1 hour and 5 minutes OR until golden brown. Remove from oven and let stand for 10 minutes before serving. Serve warm with whipped cream (sprinkled with nutmeg) or ice cream. 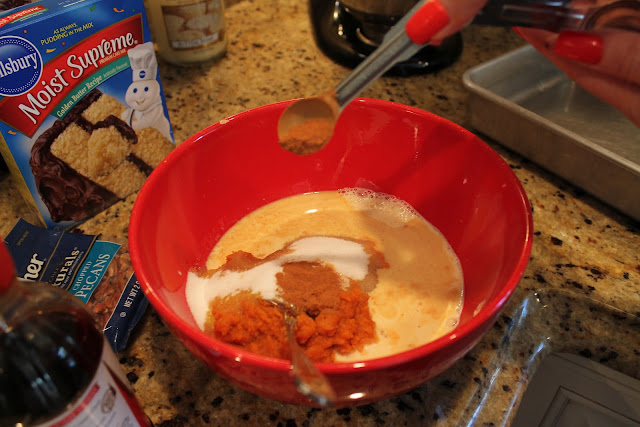 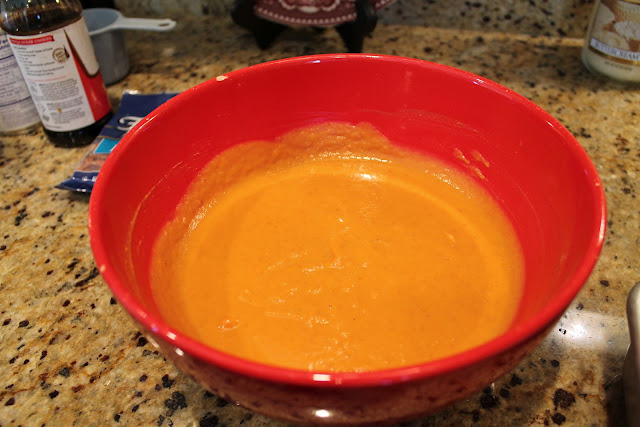 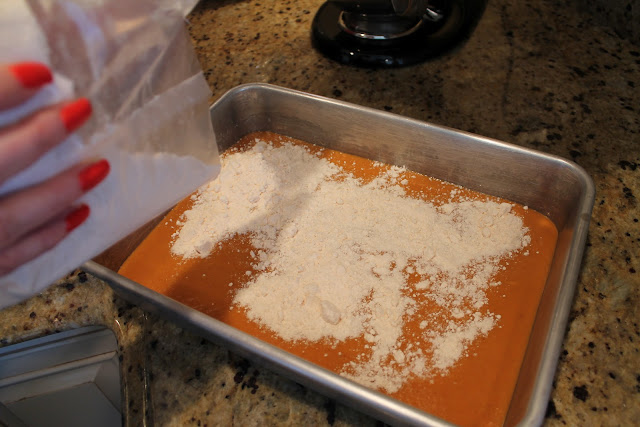 Since I haven't posted a blog in a couple of weeks, I thought I'd add a few more photos for you to look at.

This beautiful bouquet was given to me by my son, Evan, who saw them at the Farmer's Market and knew I'd like them. Aren't they pretty? I don't know what the puffy, round flowers are called. 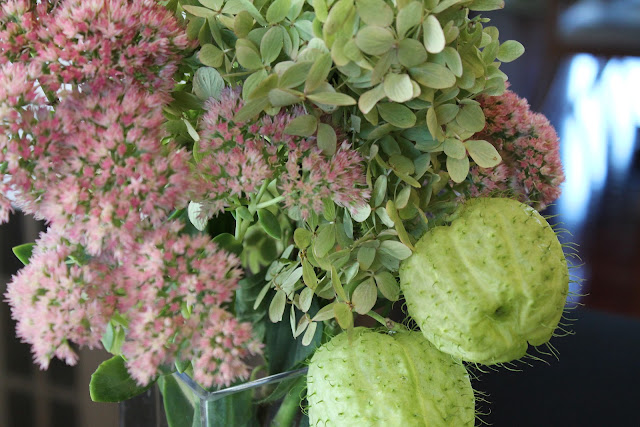 It's starting to feel cool and fall-like outside. I snapped a picture of some flowers on the deck. 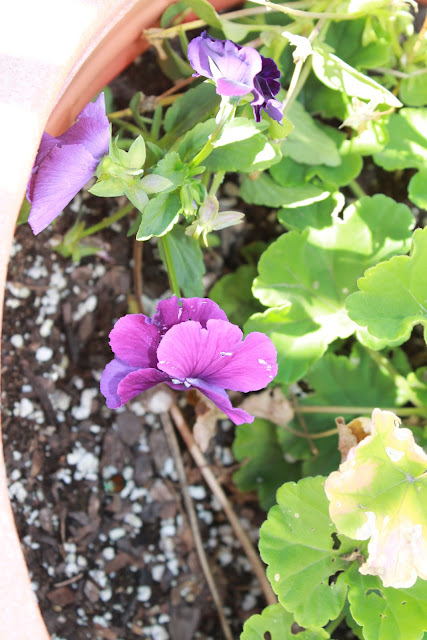 Last, but not least, my favorite candle has always been Yankee Candle's Buttercream. I love having one burning in the kitchen on a cool fall or winter's day. 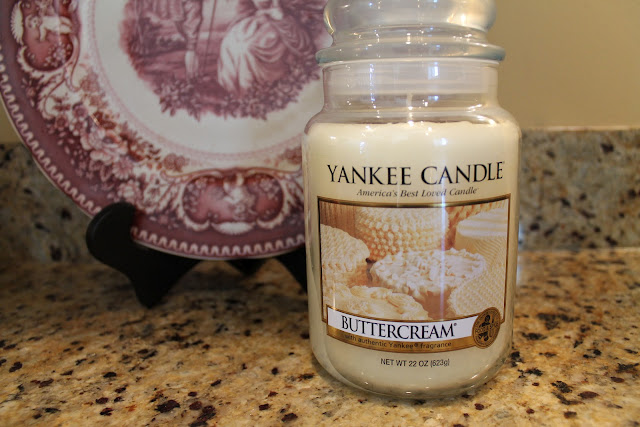 I hope you enjoy the dessert and these lovely days of fall. I was in Target yesterday and guess what? There was one aisle with Christmas cards displayed already! Yippee and Happy Fall, y'all!

Email ThisBlogThis!Share to TwitterShare to FacebookShare to Pinterest
Labels: Fall 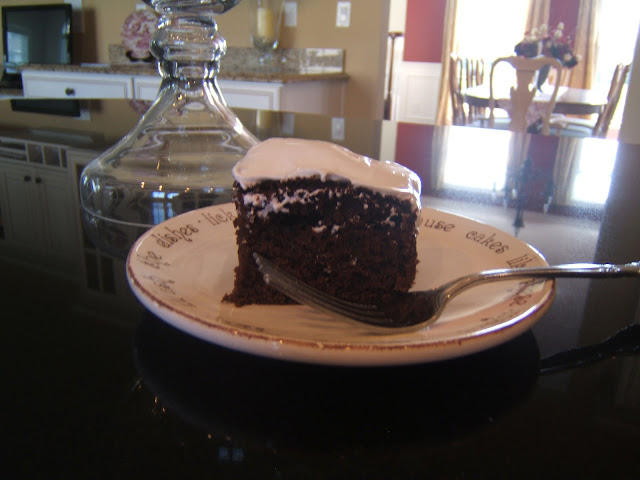 Why I Love Trash Day

Whenever Tuesday morning rolls around, I feel so happy. Why? Because it's trash pick up day and I love trash day! (It's the little things in life that make me happy.) In case this seems like the strangest topic, bear with me, because I am making a point:)

Trash day means a brand new, fresh start. It means out with the old and in with the new. The house feels like it can breathe again after I cram everything I can into those two garbage cans. Am I the only one that feels so delighted to do that? When I "feel" cluttered, I have a harder time functioning.

It may be clutter around the house that is bugging me, or sometimes even "emotional" clutter in my mind.  Sometimes things need to be thrown not only out of our house but out of our minds as well. I often try to carry too much responsibility, when God wants me to give it to Him. Jesus said that His yoke is easy and His burden is light. He wants to carry our "stuff".

A couple of years ago, we hosted our son's high school graduation party. I placed a sign on my trash cans. One that read "trash" and one that read "cans" so that people could easily dispose of their things. Well, guess what? Someone (me) forgot to take the "trash" sign off of the trashcan. You guessed it.  I had to go buy a whole new trash can that week since they took my sign seriously.

I guess I need to think of my mind clutter like that. I need wisdom of what to give to God and what to toss in the trash can.

As a side note, I don't feel the same way about the Christmas tree disposal guy. The kids and I used to sadly stand by the dining room window and watch as our poor post- Christmas tree was dumped in the back of his truck with all the other poor trees. What a depressing job. We felt like somone should be playing Taps as we watched him. But that is for another post.


As we now are fast approaching the holiday season, my heart bursts with thankfulness about all the little things that makes my day to day life of taking care of my family easier. How could any of us make or keep our homes lovely without this service? Who doesn't like a brand new start once a week?

This was not sponsored in any way by the sanitation department, and no one I know works there, but I love those guys! Thank you!

Please leave me a comment! Posted By Kathy Olson at 10:48 AM 8 comments: