Part 2 Weeping May Endure for a Night

To recap, our twins, Alex and Elisa, were born 10 weeks early on November 5, 1991. About one year later, they were diagnosed with cerebral palsy. It was a devastating diagnosis. All my dreams of a little boy and girl toddling down the sidewalk together were suddenly gone and in its place was a very uncertain future.

But God's hand was definitely on their lives. Alex had almost died once before at Blank Children's Hospital when he was three years old.  A few months later, he saw a photograph of my Aunt Loretta while visiting at my parents' home in Mississippi. He told my mom that he had met Loretta. My mom had said, "Oh, honey, you didn't get to meet her. She passed away a few months ago." Alex replied, "I saw her. When I was at the hospital and I was very sick, she was in a white robe and she waved at me and said "Hallelujah!'." He had not said anything about this to us before. It was as if seeing her photo, jogged his memory. 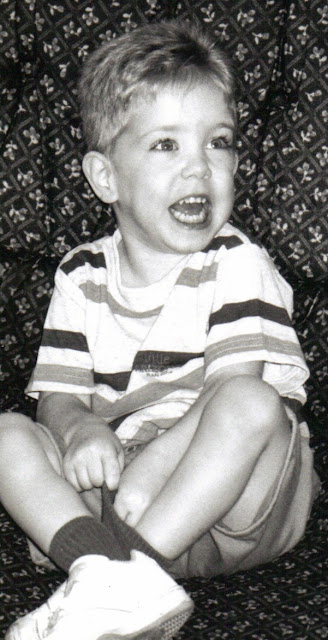 Dave's mom happened to be up visiting. I remember going into the kitchen of our trailer at Teen Challenge and putting Alex and his twin sister, Elisa, into their wheelchairs at the kitchen table. Evan was also sitting at the table with them. (They were all 4 years old at the same time for about a 3 month time period. That next month, Evan would turn 5.) I set up some finger paints and paper and got out the paint brushes. Since Dave's mom was there to help out, I could relax a little and do something fun with them.  Dave brought over some breakfast from the Teen Challenge kitchen -pancake and sausage on a stick. It's strange the funny little things that you will remember for always.

It was snowing outside and the weather report wasn't looking promising. We were going to be in for a big snowfall that day.

I remember watching Alex a little warily. The day before had been quite a bit warmer, but today the temperatures had dropped drastically. That was never a good thing for him. He was very susceptible to croup and, in the past few years, had stopped breathing because of it. He also had a condition apart from the cerebral palsy called tracheaomalacia. This meant that the sleeve of membrane that houses the trachea had never firmed up and was floppy. This caused the croup to become much worse, or exacerbated the condition. I noticed that his ears had some drainage, too. But, for the time being, he was enjoying painting at the table with his brother and sister.

A few events stand out in my mind from that day. I remember getting on to Alex about something and giving him a swat on his bottom. He happened to be crawling down the hallway at that moment and actually crawled right out of his pants. It's funny to think of now.

Then later that afternoon we watched The Donut Man together. We were watching the Resurrection Celebration and there was a part of the episode he didn't care for. A lady was very sad  talking about her husband who had passed away. I remember that Alex didn't like watching that part at all, even though by the end of the story, the lady was happy again as The Donut Man and the kids sang about Jesus' resurrection.

Something else had occurred about a month before that had also struck me as unusual. Dave and I had been gone overnight for a Teen Challenge staff retreat and had returned home the next evening. I had picked out a present for the kids and was excited to show it to them. As soon as I walked into the trailer, Alex took one look at me and burst into tears. I tried to show him the gift, but he just seemed to want to sit in my lap. I held him for the longest time until he finally calmed down. It was unusual for him to react in that way. When I look back at that time, I wonder if he somehow knew that he wouldn't be with us for much longer.

The temperatures continued to drop that day into the evening. The snow began to pile up in front of our screen door until it was hard to even open it. Christopher, my brother-in-law, also worked at Teen Challenge and came over with his guitar. He played a few worship songs while we all sat in the living room together. That was unusual, too. That wasn't a normal, everyday occurrence.  Usually, we got the kids to bed for the night and maybe watched some television.

Soon after, it was the kids' bedtime. I said goodnight to the boys, who shared a room, and gave Alex his drink of water. He asked me what we would have for breakfast the next day. For some reason, he always liked to know. I sang a couple of songs to him that he liked. The first was a little song whose title I can't remember. But it went, "He went walking and leaping and praising God." The second song was, "I Have Decided to Follow Jesus." I told the boys good night and then went on to bed. I didn't know it then, but I had just spoken the last words to Alex that I would ever say.

I heard Alex's cup hit the ground. That was a funny little quirk of his. He would finish his sippy cup of water and then throw it on the floor. I guess since he couldn't walk, he figured that was as good a way as any.

About 5 a.m. I suddenly awoke to a terrible sound. I could hear Alex in the next room, struggling to breathe. I ran into his room and scooped him up and yelled for Dave. I knew right away that it was very bad.

Dave took him from my arms. Alex stopped breathing. Dave began giving him mouth to mouth resuscitation. Alex seemed to rouse a bit and Dave pushed open the door and stepped out on the deck with him. Sometimes the cold air helped. But Alex went out again. I can remember Dave saying Alex's name, trying to get him to breathe again.

I called 911 as I had done in the past and told them to please hurry and come around to the back of the building where our trailer was located. I knew that there wasn't time to spare. The weather was terrible. There were drifts of snow everywhere, but then I saw their lights flashing and knew they had made it. In the cold, dark night, I followed the ambulance crew out and climbed into the front seat. Dave would follow in the van. We lived about 30 minutes from the hospital. We went quickly down the interstate and another ambulance met us around the Altoona exit. I remember hearing instructions being shouted and the name of a drug being administered (I believe it was epinephrine) and then we were on our way again. Several people were blocking my view of Alex. I kept praying and looking back and suddenly someone moved out of the way so that I could see. They were doing chest compressions on Alex. My heart sunk and I felt so much fear. His heart had never stopped before and I knew then that this night was different from all the other times. We pulled into the hospital and Alex was quickly whisked away from me while a lady asked me questions. I had a hard time even knowing what my name was at this point. I wished so much that Dave was there. I walked into a room where a chaplain met me. I don't really remember what she said, but I remember asking her to please go and find out what was happening to my little boy. She came back and said, "It's not looking good." The ambulance crew walked past the door and they looked so sad. Dave walked into the room and we sat together in shock. I'm not sure what we said to one another. I remember standing up and walking into the hallway where I saw the doctor approaching us. I will never forget his words for as long as I live.

Please leave me a comment! Posted By Kathy Olson at 5:35 PM

Email ThisBlogThis!Share to TwitterShare to FacebookShare to Pinterest
Labels: Grief